What a GREAT two day event!  This was our first time at this show.  The weather cooperated, and we had a very good spot for our display.  As folks meandered through the car show they stopped to take pictures, and admire our sleds.  We were well received with a lot of stories told and retold of when they rode their first snowmobile, and if one in our display was the same year and make.

We asked folks walking through to vote for their favorite sleds.  We used their votes for the 1st and 2nd place winners of the People's Choice awards.  For this show the trophies were presented by the organizers of the East Wenatchee Wings & Wheels at the same time they announced the show car winners.  Kevin Hancock won 1st place with his restored 1969 Mercury 220E.  Dick Feil took second with another beautifully restored Arctic Cat pusher sled; a 1966 Arctic Cat 460D.

The next day some of us went to watch the hydroplanes display at the annual Lake Chelan Mahogany and Merlot event.  There were some big names there like Miss Pay-N-Pack with their HUGE WWII vintage V12 Allison airplane motors roaring around the track.  Because they were not racing you could go out on one of the big Allison boats!  Now how cool is that!  Leading up to the big boats were several classes the put on a fine show for the crowd.

Click the picture to go to the club’s Google Photos site to see the show and hydroplanes: 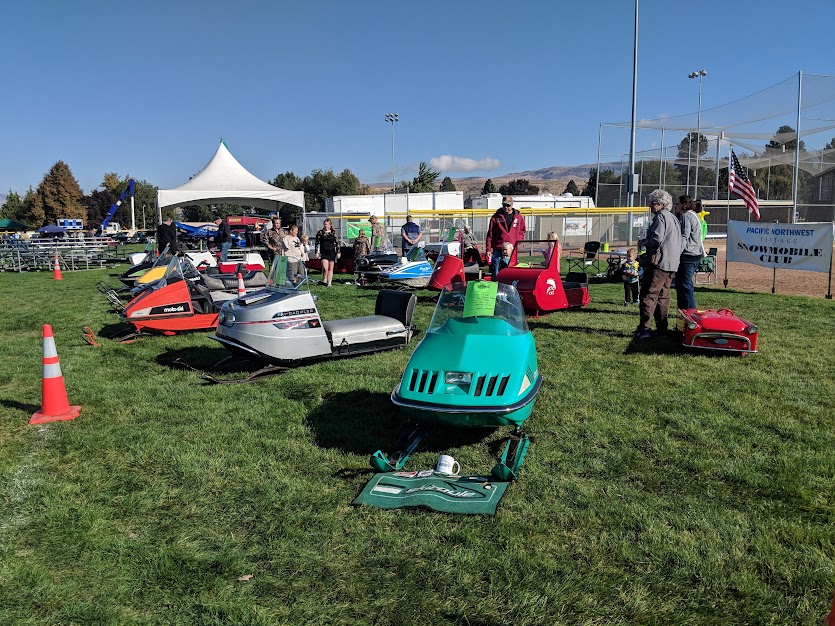 REMEMBER  the weekend of October 20 and 21 in Puyallup, WA is our final show for this summer season.  This is our 19th year showing at the Washington State Snowmobile Association’s Snowmobile & Power Sports Expo & Swap Meet.  We will be there displaying our sleds and memorabilia.