We knew it was going to be a great weekend when we got to The Last Resort to find there was a lot of snow on the ground.  Then to make it even better it started snowing Friday night.  By the morning there was an additional eight-inch of soft fluffy-power covering the show and timed event areas!   Then the snow did not stop on Friday night.  Again it snowed Saturday night leaving other four-inches by Sunday morning!  With all of the new snow on top of an already great base we had a snow-over-the-hood weekend.

On Saturday we had our antique, vintage, and classic snowmobile show.  Antique is any sled 1968 and older, with vintage models start in 1969 to the last years with spring skis, and classic sleds are those manufactured with Independent Front Suspension (IFS) up to 30-years old.   As is our custom we asked viewers and participants to vote in our People’s Choice Award contest.  Everyone voted for their favorite top three sleds.  When the votes were counted we found out this year was a bit different.  There was a tie for First Place.  Then to top it off two of the sleds were shown by the same person.  Who else could it had been our own Dick Feil who won our first ‘Double First Place People’s Choice Award’ for his 1966 Arctic Cat 170D, and his 1964 Arctic Cat 170.  Coming in second was Kevin Hancock’s 1969 Fox Trac Centura.   Then to top it off there was a third place winner.  Brian Clark won Third Place with his Mercury Sno Twister custom race sled.  Congratulations all you for working so hard creating those exceptional sleds.

To change things up we added a timed-course event, calling it a ‘Snow Moxie’.  We set up a twisty course with plastic cones that included a hill climb.  To keep it simple there were no classes, and to enter all you had to do was ‘Run What You Brung’.  Each participant had to ride three timed runs against the clock.  The winners were the participants that had the three highest averages.  Winners received a trophy and money!  There was a first, second, and third place.  This year for First Place was Brian Clark with his modified Mercury Sno-Twister, second was Greg Byrd with his stock Mercury Trail-Twister, and third Stephen Phillips with his restored Ski-doo Blizzard.  Thanks to everyone for all the enthusiasm for making this new event a success and so much fun!

Then on Sunday while Stephen, Ed, and Kevin participated in a one day avalanche course presented by the Northwest Avalanche Center, Melanie and Howard spent part of the morning and early afternoon on their vintage snowmobiles riding the trails close to the resort.

Thanks to everyone who participated in the show, timed event, and vintage ride.  It was a truly wonderful weekend in many ways. 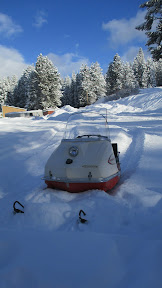