What a great and busy weekend it was at the Washington State Snowmobile Association (WSSA) Snowmobile & Power Sports Expo/Swap Meet!  This was our 20th year.   We had our display up and running well before it was time for the gates to open.  The best part of the Expo was when the public stopped to see our old machines, and swap riding stories when they were the hottest and newest sleds on the trails.

First a-special thanks goes to all those who voted for our first and second place People’s Choice Award, and Homeliest Snowmobile.  Without them the awards are not possible.  This year the public decided first place winner for Best of Show was Vinnie Pagliaro for his two beautifully restored 1969 Polaris Playmates.  Coming in a very close second with just five-votes short was Dick Feil for his 1966 Arctic Cat 560D.  All of the sleds were skillfully restored.  Then there was the winner for the Homeliest Snowmobile.  They decided Dick Fiel won the trophy for his original 1964 Fox Trac 140.  That model of sled was voted the ugliest snowmobile in North America about 5 years ago by national vintage snowmobile groups.

Click on the picture to our Goggle Photos site: 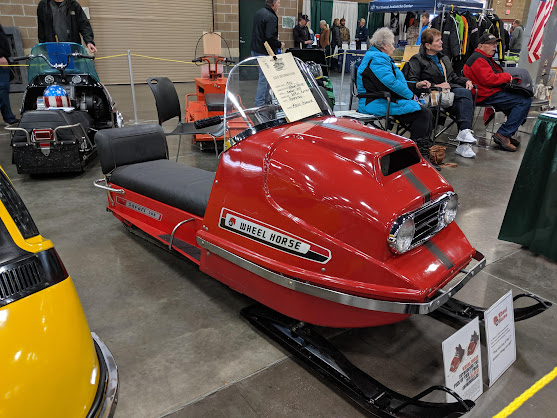